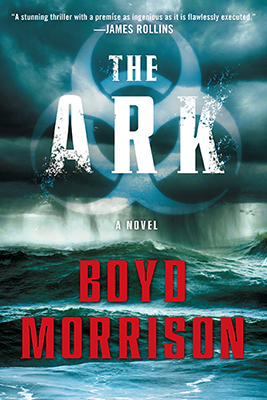 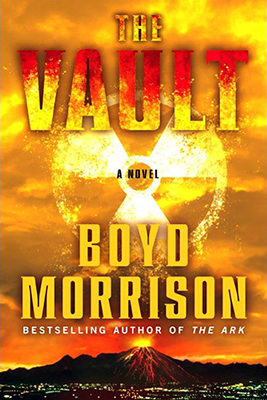 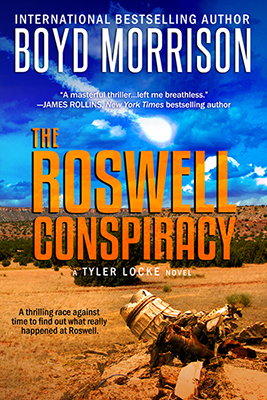 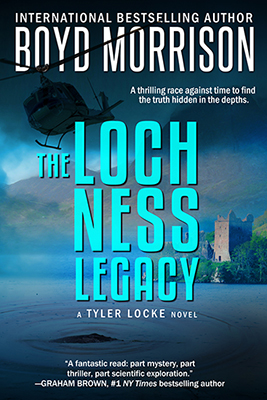 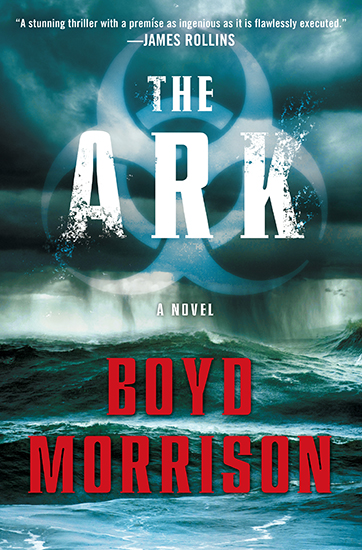 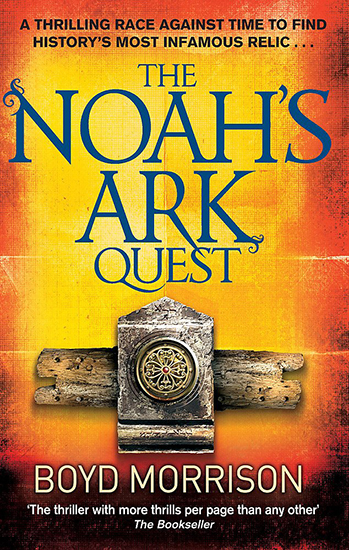 The greatest archaeological discovery in history could mean the end of mankind.

When brilliant archaeologist Dilara Kenner is contacted by Sam Watson, an old family friend who says that he has crucial information about her missing father, Dilara abandons her Peruvian dig and rushes to Los Angeles to meet him. But at the airport, Sam speaks instead of Noah’s Ark—the artifact her father had long been searching for—and the possible death of billions. Before Sam can explain, he collapses. With his dying breath, he urges Dilara to find Tyler Locke—a man she’s never heard of.

Two days later Dilara manages to track down former combat engineer Tyler Locke on an oil rig off Newfoundland. Her helicopter transport goes down well short of the oil rig’s landing pad and Dilara and those aboard nearly drown. After Tyler accomplishes a daring rescue, Dilara convinces him that the crash was no accident. Tyler agrees to help her unearth the mystery behind Noah’s Ark and, more importantly, her father’s disappearance.

Their investigation soon reveals that a group of religious fanatics has recovered a weapon from the Ark that will let them recreate effects of the biblical flood and recreate humanity according to their leader’s twisted vision. Now Tyler and Dilara have just seven days to find the Ark and the secret hidden inside before it’s used to wipe out civilization again.

Praise for The Ark

“Boyd Morrison’s novel, The Ark, is a stunning thriller with a premise as ingenious as it is flawlessly executed. Lightning-paced, chillingly real, here is a novel that will have you holding your breath until the last page is turned. One of the best debuts I’ve read this year.”
—James Rollins, NYT bestselling author

“If you have ever watched any show about Noah’s Ark and for a moment wished the ark were really there to be found, then this work is for you. A bonus: Locke is a kind, smart, consummate action hero. Let’s hope he’s in the sequel.”
—Library Journal
“This is a solid, well written thriller, full of action, villainy, and close calls. Fans of James Rollins, Matthew Reilly, and Douglas Preston take note.”
—Booklist
“Morrison has a great sense of timing and pacing and this book builds up speed while you read. A perfect thriller.”
—Crimespree Magazine
“Heart-stopping action, biblical history, mysticism, a stunning archeological find and mind-boggling evil results in a breath-catching adventure… This could easily be the most audacious and compelling novel and perhaps the most fascinating debut of the year.”
—RT Book Reviews
“Mach-speed mayhem. The Ark crackles with tension and imagination from the first page to the last. Just the right blend of menace and normality. Boyd Morrison is a writer to watch.”
—Steve Berry, NYT bestselling author
“Taut and endlessly exciting, The Ark by Boyd Morrison is a thrill-a-minute ride across time and continents in search of one of the world’s most fascinating mysteries. From memorable characters to insider information, you’ll love this adventure of a lifetime.”
—Gayle Lynds, NYT bestselling author
“The Ark features the perfect blend of historical mysticism and clever, classical thriller plotting… The search for Noah’s Ark may continue but the search for the next great thriller writer ends here.”
—Jon Land, NYT bestselling author 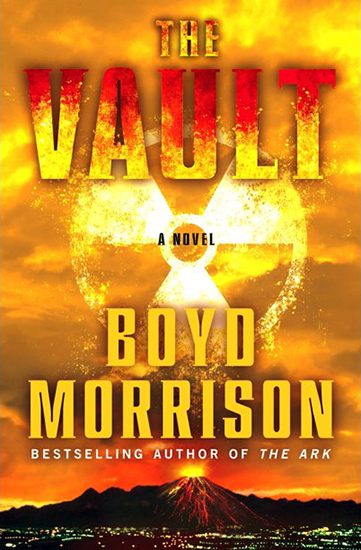 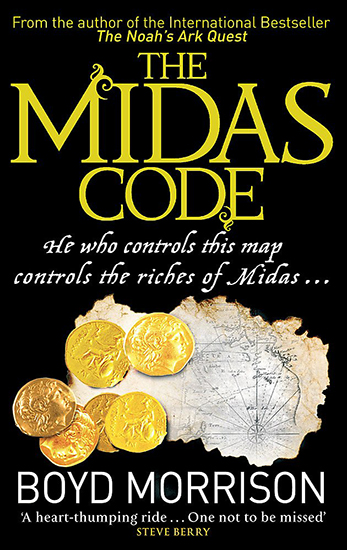 An ancient puzzle. A ruthless mastermind. The curse of a legendary treasure.

Tyler Locke’s routine commute on a Washington State ferry is interrupted by a chilling anonymous call claiming that his father has been kidnapped and that a truck bomb is set to detonate on board in twenty minutes. When Tyler reaches the bomb on the boat’s car deck, he’s stunned to find classical languages expert Stacy Benedict waiting for him. She’s received the same threat and her sister has also been taken. In order to disarm the bomb, they must work together to solve an engineering puzzle—a puzzle written in ancient Greek. Preventing the explosion is only the first step. They soon learn the entire setup is a test created by a ruthless criminal who forces them to go on a seemingly impossible mission: uncover the legendary lost riches of King Midas.

Tyler and Stacy have just five days to track down the gold. Armed with an ancient manuscript penned by brilliant Greek inventor Archimedes, they begin a quest to unravel a 2,000-year-old mystery whose answer is hidden within the workings of a cryptic artifact: the Antikythera mechanism, a device designed by Archimedes himself.

To save their loved ones and prevent their captors from recovering a treasure that will finance unspeakable devastation, Tyler and Stacy head to Italy, Germany, Greece, and finally the streets of New York City in a race against the clock to find the truth behind the story of King Midas.

Praise for The Vault

“[An] excellent third thriller… Compelling action… [An] electrifying blend of history, myth, and science.”
—Publishers Weekly, Starred Review
“Morrison has created another nail-biting excursion into the realm of greed, technology, myth and the mind of a killer. The Vault is a solid-gold thrill ride that will keep readers riveted.”
—Pat Cooper, RT Book Reviews

“Boyd Morrison hits his stride and delivers another smart, sassy tale fraught with action… It’s a heart-thumping ride, firing on all cylinders. One not to be missed.”
—Steve Berry, NYT bestselling author 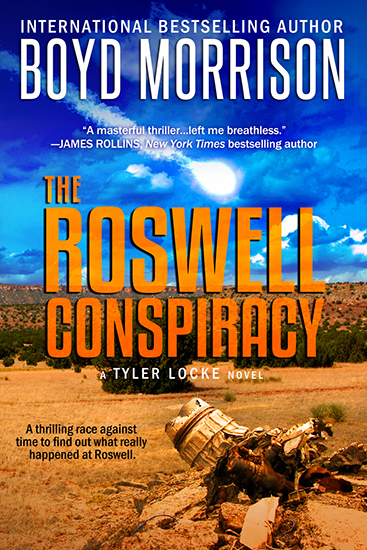 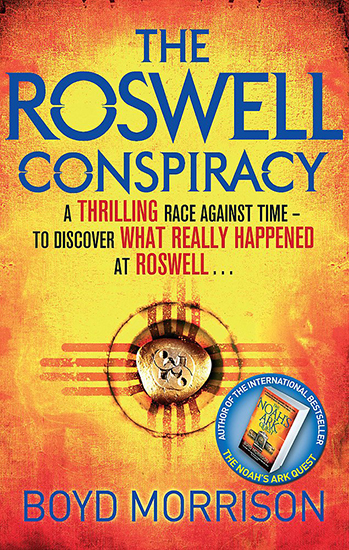 The Roswell incident was only the beginning…

After the 1908 Tunguska blast levels a Siberian forest the size of London, a Russian scientist makes an amazing discovery amongst the debris.

In 1947, ten-year-old Fay Allen of Roswell, New Mexico, witnesses the fiery crash of an extraordinary craft unlike anything she’s ever seen.

More than sixty years later, former Army combat engineer Tyler Locke rescues Fay from gunmen who are after a piece of wreckage she claims is from the Roswell incident. Incredulous of her tale, Tyler believes the attack on Fay is nothing more than a burglary gone wrong. But when he finds himself locked in the back of a truck carrying a hundred tons of explosives and heading for a top secret American base, Tyler knows that he has stumbled onto the opening gambit of something more sinister than he ever imagined.

Because disgraced Russian spy Vladimir Colchev is after an Air Force prototype code-named Killswitch, an electromagnetic pulse weapon of unprecedented power. Although Tyler is able to avert catastrophe at the US facility, Colchev gets away with the bomb and plans to turn it on America itself. To complete his mission, he needs only one other key component, a mysterious object recovered from the Roswell crash.

In a desperate race against time, Tyler must unmask a conspiracy a century in the making to rescue the United States from electronic Armageddon.

Praise for The Roswell Conspiracy

“In The Roswell Conspiracy, he shows his talent has not stopped growing. Here is a masterful thriller wrought with historical weight, technological prowess, and gut-twisting action, with an ending that left me breathless.”
—James Rollins, NYT bestselling author

“A perfect blend of historical fact and modern day threats that will keep you guessing late into the night.”
—Brad Taylor, NYT bestselling author
“The action never lets up. Sympathetic heroes and cleverly-drawn villains battle for supremacy in this complex thriller… A thoroughly satisfying read.”
—James Becker, bestselling author
“Just check your gun and parachute, take a deep breath and jump in to a whole world of history, deception and thrills. This is fast, fun and fascinating thriller writing at its most original.”
—Sam Christer, bestselling author
“Relentless pace, intricate plotting, and an ending that ratchets up the tension to dizzying heights and keeps it there—seemingly forever. What more could anyone want?”
—Douglas Richards, NYT bestselling author 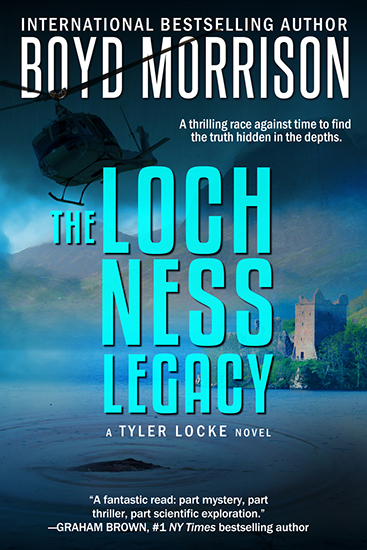 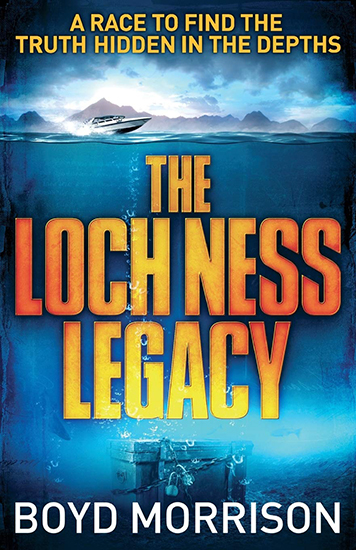 During a trek to Loch Ness, Scotland, a young Charles Darwin encounters a mysterious and terrifying creature that provides a spark for his evolutionary theory.

Almost two hundred years later and across the Channel in Paris, the Eiffel Tower is under attack. Only through detective work, intuition, and a judicious application of high-tech weaponry does former Army combat engineer Tyler Locke prevent a massacre.

What Tyler doesn’t know is that the assault is just the beginning of a conspiracy so dark that it not only threatens the lives of those he loves, but could also ignite World War III. Racing against time to uncover Darwin’s centuries-old secret, he must solve a series of cryptic clues to find a manuscript that has been so cleverly hidden it hasn’t been seen since the Victorian age.

Tyler’s quest takes him from the bustling tourist hotspots of Seattle to the splendor of Versailles to the remote Highlands of Scotland in a battle to reveal the shocking truth behind the legend of the Loch Ness monster.

Praise for The Loch Ness Legacy

“The Loch Ness Legacy is a perfect storm of history, science and action that is sure to please anyone with a pulse, and maybe a few without them.”
—Jeremy Robinson, bestselling author

“The Loch Ness Legacy starts with a bang and delivers an adrenaline fueled thrill ride to the very end. Tyler Locke is my new favorite hero! If you like Dan Brown and James Rollins, you’ll love Boyd Morrison.”
—Allison Brennan, NYT bestselling author
“Boyd Morrison delivers yet another fast paced, action-packed adventure that will leave you breathless.”
—Douglas Richards, NYT bestselling author
Selected as one of Suspense Magazine’s Best of 2013